Last week, Wawa announced that millions of customers might have had their credit or debit card information stolen in a data breach impacting almost all of their store locations. According to the report, malware, which originated on March 4, was discovered on Wawa’s payment processing servers on December 10. As a result of the breach, Wawa is offering enrollment in a credit monitoring service, Experian Identity Works, free of charge.

If you have been to a Wawa sometime between March and December, monitoring your payment card account statements and checking your credit reports will help mitigate any potential fraudulent activity.

LifeLabs recently experienced a data breach, exposing the sensitive information of almost 15 million Canadian clinical laboratory customers. Of those 15 million customers, around 85 thousand had their lab results exposed as well.

You can find the data breach announcement here.

A botnet, named MyKingz (also known as DarkCloud, Smominru, or Hexmen), is currently using an image of Taylor Swift to hide malware payloads which infect various devices over the internet.

Cybercriminals have used other steganography-based attacks in the past, such as hiding EXE files in WAV audio files. The MyKingz attacks have proved successful as Sophos estimates it currently makes $300 a day, totaling over $3 million as of this writing.

You can read more about MyKingz here.

Apple has officially announced its private bug bounty program, providing rewards from $25,000 to $1 million. The bug bounty encompasses a variety of products, including Macs, iPhones, iPads, and Apple TVs.

The substantial $1 million bounty requires security researchers to provide a reliable exploit for a zero-click remote chain with full kernel execution and persistence on Apple’s latest hardware as well as a bypass for Apple’s kernel Pointer authentication code.

According to Apple, vulnerability types include:

A critical vulnerability in Citrix’s Application Delivery Controller (NetScaler ADC) and Citrix Gateway has put over 80,000 companies at risk. The vulnerability, CVE-2019-19781, affects all supported versions of the product on all supported platforms.

According to the security researcher who discovered the vulnerability, the flaw allows “attackers [to] obtain direct access to the company’s local network from the Internet,” and it “does not require access to any accounts,” allowing it to be performed by any external attacker. 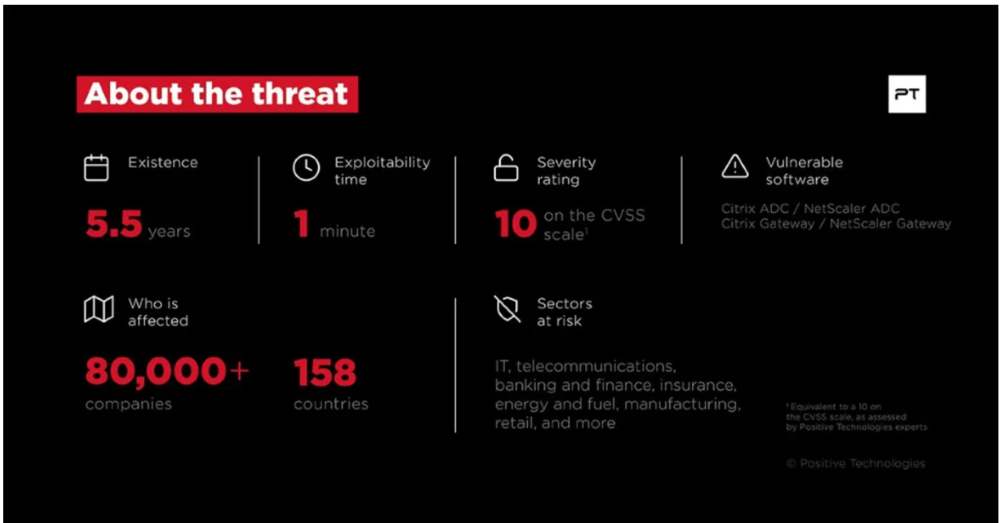 As Citrix applications are widely used in corporate networks, remediating the flaw is critical. Thankfully, Citrix has released steps to lessen the risk of a successful attack with a recommendation to update all vulnerable software versions.