Privacy coins are cryptocurrencies that specialize in keeping you and your transactions hidden.

Although the media portrays crypto as an anonymous, dark web currency, it’s actually quite transparent. Most blockchain networks broadcast every transaction and wallet balances publicly, so tracing someone’s financial activity isn’t all that difficult.

Privacy coins focus on keeping transactions anonymous and untraceable. Anonymity disassociates your identity from your wallet and specific transactions while untraceability prevents outside parties from piecing together your blockchain activity. They do this in a process called chain analysis.

Chain analysis isn’t simple, but several companies specialize in it, and they’re paid the big bucks to do so. Often, it’s a continuous game of cat-and-mouse between privacy coins and the software trying to monitor them.

Privacy coins differ in the tactics they use to keep your identity shielded. Often they’ll implement a mix of different strategies. Let’s examine some of the most popular ones.

Stealth addresses are arguably the simplest way to improve your transaction privacy. At their most basic, stealth addresses involve creating a new address each time you receive cryptocurrency. Doing so ensures that outside parties can’t link any future payments to your wallet address.

Some cryptocurrencies have more complex tactics, however. 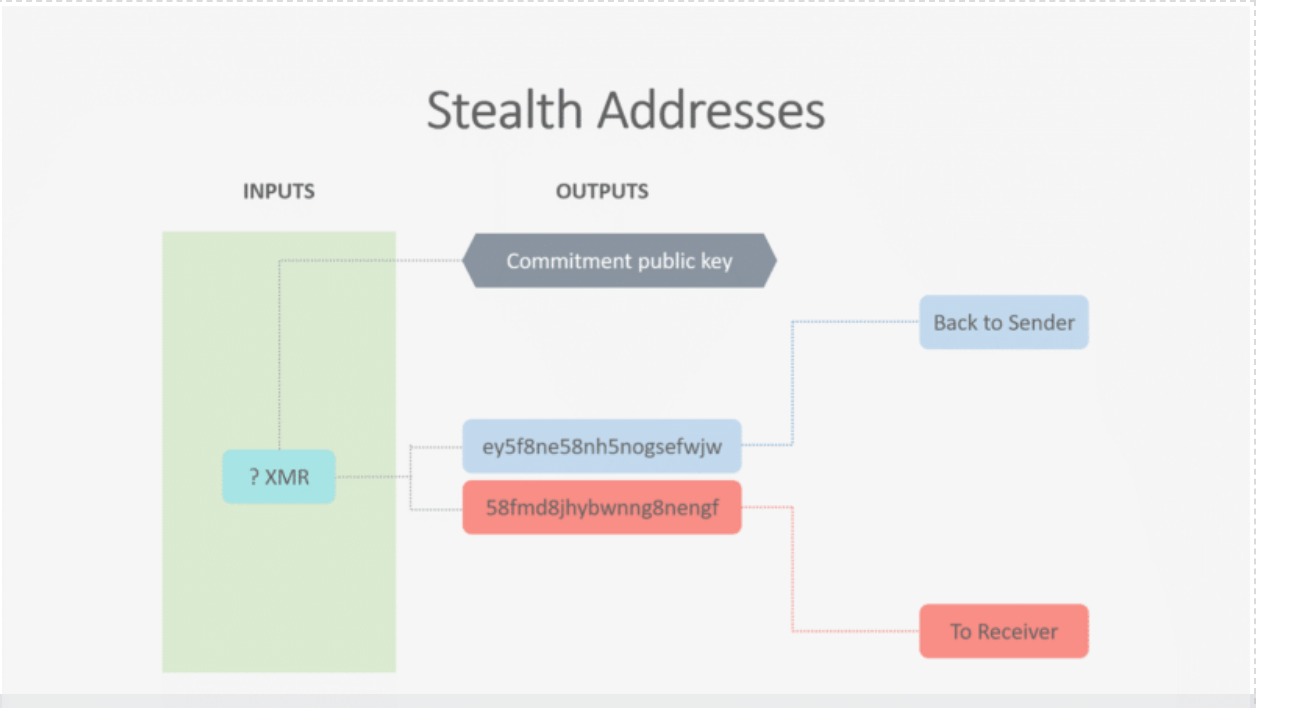 You send crypto using the spend key and display incoming transactions with the view key. Although your recipient address is public, the funds you receive from each sender go to a separate, unique blockchain address. Only the sender and receiver in each transaction know the fund’s final destination.

In a blockchain transaction, you sign a digital signature to verify that you’re the sender. You’re the only person doing this signing, so it’s not tough for someone to trace it back to you.

Ring signatures combine you with other signers in a ring to hide you as the sender. The higher the number of additional parties in the ring, the harder it is for someone to connect you with the transaction. It’s like playing a game of blockchain Where’s Waldo.

Ring signatures hide you among other senders. | Source: CryptoNote

Ring Confidential Transactions (RingCTs) build off the foundation of ring signatures. In addition to masking your identity, RingCTs encrypt the output of your transaction, concealing the amount.

CoinJoin takes the coins from different senders and combines them into a single transaction. From there, a third-party effectively mixes the coins and sends them out to recipients. Each recipient receives the coins in a fresh (never used) address to reduce the traceability further.

Although CoinJoin was first proposed as an improvement to Bitcoin, it’s gotten more traction as a component of Dash’s Private Send feature.

zk-SNARKs, or Zero-Knowledge Succinct Non-Interactive Argument of Knowledge if you want to show off, are a form of cryptography with which you can prove you hold information without having to reveal what that information is. A little wordy, we know.

In the realm of cryptocurrency, zk-SNARKs allow you to prove that a transaction is valid without sharing its details (sender, receiver, amount). This mechanism not only improves privacy but can also help with a blockchain’s scalability.

Zcash is the most popular privacy coin to utilize zk-SNARKs. However, Ethereum co-founder Vitalik Buterin has hinted that Ethereum may soon implement zk-SNARKs as well.

For the most part, you can amend the previous functions onto existing blockchains. That’s not the case for MimbleWimble.

MimbleWimble is an entirely different blockchain protocol that only started gaining notoriety recently. Unlike typical blockchains, it doesn’t have addresses and forgoes a scripting language.

Instead, each block consists of only signature data, a list of outputs, and a list of inputs. As long as the total inputs equal the total outputs, the block is valid.

MimbleWimble brings to the table many of the same benefits as CoinJoin and confidential transactions without the bloat that usually plagues them. Currently, Grin and Beam are the two main projects working with MimbleWimble. But, Bitcoin and Litecoin developers are exploring implementations of the protocol as well.

There are ways to connect you to your crypto transactions beyond figuring out your public address. The most common identifier is your IP address.

Tor uses onion routing to wrap your IP address in layers upon layers of encryption. While you can use Tor with any blockchain, some include it by default. Both Verge and Monero protect transactions with Tor or some alternative.

You may not think that you need to keep your crypto activity private. If you’ve got nothing to hide, then why worry about it, right? Well, there are quite a few reasons why you should be in favor of a privacy-focused future.

To best explain the importance of privacy coins, let’s tie it to a more familiar example, traditional banks. A blockchain without privacy mechanisms is like a bank that posts all of its customers’ transactions online. Just search an account number, and you’ve got access to someone’s complete financial history as well as the amount of money they possess.

Even though you probably don’t know anyone’s account number, it wouldn’t be a challenge to figure one out if you wanted to. You can see the issue with that transparency. Blockchains are no different.

Perhaps more important than individual privacy, though, is the necessity of fungibility in a monetary system. Fungibility is a property in which you can interchange one currency unit for any other unit. For instance, every gram of gold is identical, so you can always exchange one gram of gold for another.

You can’t say the same for bitcoin. A bitcoin may become tainted through money laundering or other illegal activity. Because you can track bitcoin to its source, some vendors may not accept the tainted bitcoin, placing a lower value on it than an untainted one.

Fungibility brings reliability to a currency, and without a certain level of it, the currency won’t survive. Why would you keep a currency if you’re not confident that it’ll be accepted when you spend it?

A privacy coin has no transaction history, so it can never become tainted. Privacy coins maintain your anonymity, but even better, they guarantee the fungibility that a currency needs to stand the test of time.